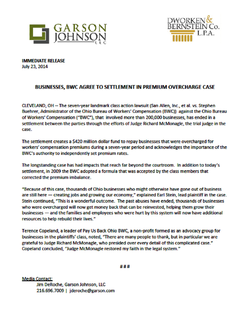 COLUMBUS – Today Ohio Bureau of Workers’ Compensation (BWC) Administrator/CEO Steve Buehrer announced that the bureau has reached an agreement in principle to settle the San Allen case, a class action lawsuit filed in 2007 against the State of Ohio over BWC pricing policies that were in place between 2001 and 2008.

“Ohio has made major changes to its workers’ compensation system over the past several years.  The policies that were at issue in this litigation in 2007 are not the same ones in place today, and we’re pleased that we have reached a settlement so we can move forward.  Improvements have been made to how premiums and discounts are calculated, as well as to billing practices, and premiums are continuing to go down as a result.  Sound management of the trust fund made it possible to return $1 billion in rebates to customers last year, and major investments in workplace safety are helping employers do a better job of preventing injuries by keeping their workers safe.  All of these improvements are paying off for workers and businesses, and we’re going to keep building on them.”

If the Court gives its preliminary approval to the settlement agreement, class members will be notified with instructions for submitting claims.  A third-party claims administrator will then begin processing claims in the next few months.

Details of Agreement in Principle

·   $420 million fund will be created to pay for claims to employers participating in the lawsuit, the class’s attorney fees, court costs and the costs of administering the fund ;
·   Claims will be filed with a third-party administrator appointed to manage the claims process;
·   Any unclaimed funds will be returned to BWC’s State Insurance Fund to pay claims to injured workers.

Background on the San Allen lawsuit