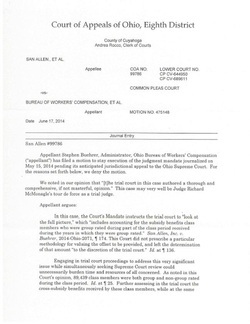 The BWC asked the Court of Appeals to put their decision hold until after the Supreme Court rules on their appeal (which has not yet been filed).  Judge Rocco (the Presiding Judge) in the attached decision, told the BWC no.  The BWC argued that that judicial economy requires the stay, but the Court of Appeals said that judicial economy requires the case to move forward without further delay.